Sports and the military have always had a uniquely rewarding relationship, perhaps summarized best by legendary World War II Gen. Douglas MacArthur. “Upon the fields of friendly strife are sown the seeds that upon other fields on other days will bear the fruits of victory,” he famously said decades ago about the role of sports in the armed forces.

The staff ride is no longer for military personnel alone. We adapted the practice for executive leadership development training for corporate teams, government leaders, profession and collegiate coaching staffs as well as anyone with an interest in learning the lessons of historic battles and their impact on our present and future. The Battlefield Staff Ride draws on the popularity of experiential learning while utilizing the intensity of combat to dramatize decision-making under the most extreme circumstances. Boardroom to Battlefield has adapted its corporate staff ride to meet the leadership dynamics of professional and collegiate coaching staffs. Battle plans are developed by generals and their staffs but they are executed, fought, and won at the small unit level (platoons and squads = teams). The number of players on a football field at one time (11) is roughly equivalent to the number of soldiers in a squad (12). That’s the size of a Navy SEAL team and the number of soldiers in the 2,500 squads that were engaged in combat the past 12 years.

A Coach’s principles apply to extreme situations; a military leader’s life-and-death situations. There’s a difference between wanting to win and wanting to live, but the impulses are pretty much the same, the conditions are pretty much the same, and the choices of action are remarkably close. People want to be on a team. They want to be part of something bigger than themselves. They want to be in a situation where they feel that they are doing something for the greater good. 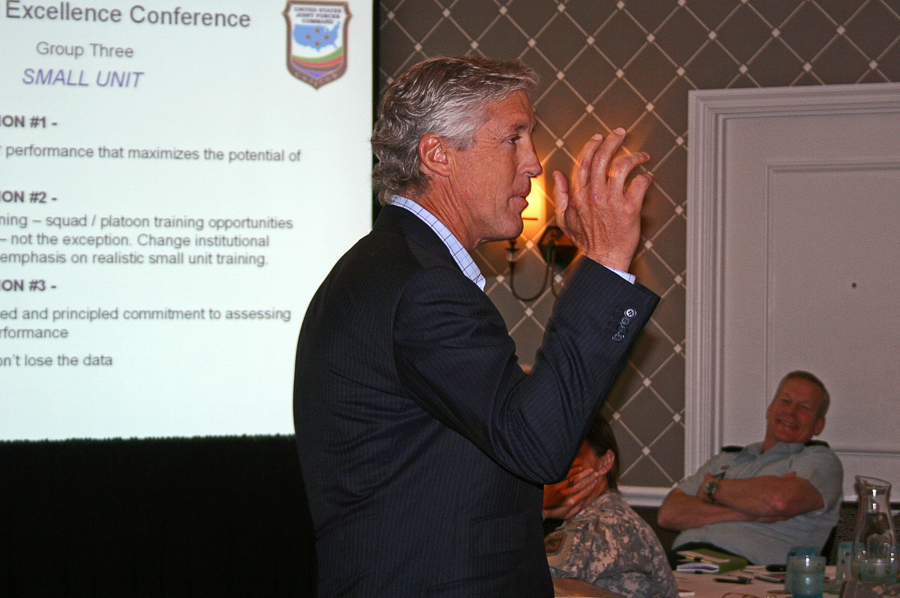 Boardroom to Battlefield currently offers four Staff Rides: Little Big Horn, Antietam, Gettysburg, and Normandy. We have hosted many Fortune 100 corporate clients as well as key government officials, including members of the house armed services committee. Ride on horseback along Medicine tail Coulee following Custer’s route before his last stand or retrace Picket’s steps during his famous charge at Gettysburg while Boardroom to Battlefield’s staff relate the commander’s intent and key decisions that were made then, to the dynamics of your coaching philosophy and long term goals for your organization. This is a leadership development staff ride not a battlefield tour. The battlefield is simply a metaphorical experience, an intellectual vessel that you will use to understand how human beings act in time of crises. You will filter what you see through the lens of your own experiences. We will help you look inward and reflect on how what was done here influences your own life and times. If you leave one of our battlefields with a renewed awareness of the human condition then you will understand why soldiers study and revere this very sacred ground.

Your event will be led by one of the General Officers on Boardroom to Battlefield’s staff, COL (ret) Jack Pryor, a Silver Star recipient from Vietnam who was also the former UNLV baseball coach and member of the UNLV Hall of Fame and Greg Lindsey, MBA, a retired Army Ranger who has extensive knowledge of military operations as well as business leadership. The ride is augmented by other personnel who are all combat veterans with extensive knowledge of history, tactics and battlefield leadership. Members of our team will meet and collaborate with you and your organization to customize and tailor the offerings to meet your organization goals and objectives to guarantee the maximum return on your investment. Examples could be to 1) focus on a particularly important aspect of the organization, 2) invest in leadership development at a specific management/coaching level, or 3) explore leadership issues relevant to the entire organization.

Some examples of the leadership elements that will be explored are:

Contact us and let us design a unique leadership learning adventure for your staff
“A leader may be the most knowledgeable person in the world, but if the players on his team cannot translate that knowledge into action, it means nothing” Coach Mike Krzyzewski